This discussion will cover basic geometry of the cosmos. I will cover expanding space, Hubble law, three possible versions of the Big Bang Theory from two points of view and to find commonality among them. I will derive the Hubble law from simple principles and explore the geometry of them. The physics of cosmology, which is driven by energy and momentum and other dynamics, will not be discussed here. Then we will discuss the Newtonian cosmology which will lead to the Friedmann, Lemaître, Robertson, Walker (FLRW) cosmology.

The discovery by Hubble is the corner stone of modern cosmology. We take for granted that we live in an expanding universe made up of billions of galaxies each with billions of stars. But less than one hundred years ago our concept of the universe was limited to the Milky Way. All those fuzzy dots in the heaven were called nebula. Though it's  hard to imagine that looking at M31, the Andromeda Galaxy, or M33, The Pin Wheel Galaxy, both easily resolved in the telescopes at the time that it wasn't before Hubble that someone didn't challenge the concepts of the time. It is a human failing that keeps us from challenging accepted beliefs especially when they are delivered to us from "authoritative spokesmen". We think of Galileo defying the teaching of the Roman Catholic Church for suggesting the the earth was not the center of the universe. This was never declared in the Latin Bible nor any other biblical text, but was an assumption made by those in authority. Galileo had Pope Urban VIII, Hubble had Harlow Shapley who firmly believed that the Milky Way was the extent of the universe. In 1922-1923, Hubble identified Cepheid variables in both M31 and M33. Cepheid variables are stars who's periodicity is directly related to their luminosity. Cepheid period-luminosity relationship data was compiled by Henrietta Swan Leavitt.  Luminosity is an intrinsic value a star where as its brightness is a function of distance. Hubble realized that by measuring the brightness of these stars he could determine their distance. His observations proved conclusively that these two systems were far too distant to be part of the Milky Way. Hubble went on to collect spectra from these distant objects. It was noted that these spectra were doppler shifted, and the greater the distance the greater the shift. Hubble was at a loss to explain why this was so. His original data when plotted look like a scatter chart and the Andromeda galaxy, to add to the confusion, was blue shifted.  However, he was able to see the trend of increasing red shift with increasing distance and this relationship became Hubble's Law. When Hubble published his findings in 1925, George Lemaître (1895-2015) made the connection with the previous findings of Alexander Friedmann (1888-1925), who in 1924 derived an expanding universe from Einsteins relativity theory. In 1935 Howard Roberson (1903-1961) USA and Arthur Geoffrey Walker (1909-2001) both arrived at the same conclusion as Friedmann and Lemaître. This has become basis for the standard model of cosmology also known as FLRW metric. Though the four all worked independently they all came to the same conclusion. Friedmann and Lemaître used Einsteins general relativity to arrive at their metric Roberson and Walker used classical Newtonian physics. This metric was based on the assumption the space is homogeneous (the same everywhere) and isotropic (the same in all directions). In the intervening years these assumptions proved to be correct. The drawing below is a representation of an imaginary one dimensional cosmology. The dots represent objects and they are space equidistant from each other. The spacing is "a". so the distance between any two points is

is the newtonian notation for a time derivative

<\span> Lets modify the equation by multiplying by one

Now we can extend this to three dimensional space: 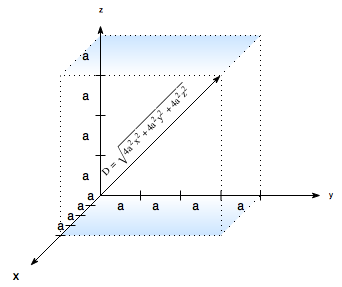 So distance in this geometry, using pythagorean theorem, is

. If we factor out

Using the same algebraic manipulations in eq 2, 3, 4 we have the same result: